I saw a donut hole with a pipette of liquor in it. I just HAD to recreate it!

Now, I’ve made donuts in the past. I’ve also had boozy desserts in the past. Heck, I’ve had boozy cupcakes at most of my birthday parties. Same concept – Cupcake with a pipette of liquor. This, however, was next level!

Inspired by a donut shop that opened this year here in Miami called The Salty Donut, I wanted to emulate their latest and greatest creation – the Coquito Doughnut Hole. Since they can’t sell liquor, they reduce the coquito to a glaze, and let me tell you…tastes just like coquito!

So that was my mission and I chose to accept it.

How To Make This Coquito Donut Hole Recipe

I made the coquito first, which was incredibly easy to make and placed it in the fridge for a few hours. Considering that I’m Cuban, I know I should be making Crema de Vie which is Cuban Eggnog buuuut…I love coconut. So, coquito wins!

Next on the list was making the actual donut holes.

The best part of this recipe? You can make the donut holes in 3 minutes!

Using refrigerated biscuit dough instead of making your own, you basically cut the individual biscuit into quarters and fry each one. You can definitely make your own dough if you prefer but when you need a last-minute idea, this is hack goals!

Surprisingly, these donut holes were really easy to fry. There was no splashing or loud cracking of oil. Instead, the dough quietly sizzled when it hit the oil and it cooked really fast. For someone that hates to fry, this was pretty quick and painless. The way cooking should always be.

And in case you were wondering, the taste of the dough was not buttery like a biscuit. Instead, it was warm, fluffy, and tasted just like a donut! Perhaps it was the cinnamon sugar that helped with that. ;)

Once they’ve cooled and you’ve rolled the donut holes in cinnamon sugar, you add coquito into the pipettes, which you can purchase here, and then stick the pipette into each donut hole.

You can either squeeze the pipette of the coquito into the donut OR take the coquito as a shot and then eat the donut after. Either way, it’s a win!

I hope you make this and you LOVE it! 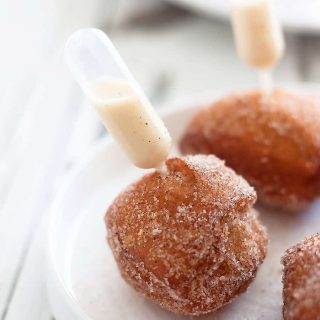 4.84 from 6 votes
By: Jamie Silva
Coquito Donut Holes is a quick + easy donut hole recipe made using refrigerated biscuit dough and homemade coquito. Once you cut and fry the dough, just toss the donut holes in cinnamon sugar and add a pipette of coquito to each one. This special treat is perfect for crowds and is a family favorite during the holidays!
PRINT RECIPE PIN RECIPE
Prep Time 15 mins
Cook Time 10 mins
Total Time 25 mins
Course Dessert
Cuisine American, Latin
Servings 32 donut holes