Juicy turkey burgers made with chorizo, onions, spices, gruyere, shoestring potatoes, and homemade guava BBQ sauce on toasted hamburger buns. This is my version of a Cuban frita.

GUYS! I’m SO excited to share this recipe with you!

This chorizo turkey burger is inspired by a Cuban frita aka a Cuban-style hamburger.

What is a Cuban frita?

A frita (pronounced free-tah), popular here in South Florida, is a Cuban hamburger typically made of ground pork and ground beef with tons of spices, store-bought potato stix, onions and a special sauce served on a Cuban roll.

Yeah. It’s pretty amazing, right? It makes all other burgers look basic AF. But here’s the thing. No frita is created equal.

Some are made with pork and beef, others with chorizo, pork and beef. Even only chorizo and beef. So many variations. There’s really is no wrong way to make it as long as you have all the right spices, a special sauce, and some good ass toasty bread.

With all that in mind, I decided to create my own version of a Cuban frita.

OMG. THEY WERE SO GOOD.

At first, I had my doubts that the ground turkey would be too dry. Or worst, that the flavor combo would just not be good.

But I gotta say, this burger was so flavorful!

Have you ever tried guava BBQ sauce?

I have a recipe for it below. It’s very sweet and tangy. Gives this chorizo turkey burger the perfect balance of sweet and salty!

So let’s review… you get the nutty flavor from the gruyere, the sweetness from the guava BBQ sauce, and the crispy crunch from the shoestring potatoes. What’s not to like?

I know it seems like there are several elements to this burger but they all come together to create this true work of art. #extraAF

I honestly just have nothing but good things to say. But don’t just take my word for it, make them this weekend and let me know what you think! 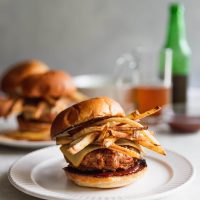